The Evolution of Business Phone Systems 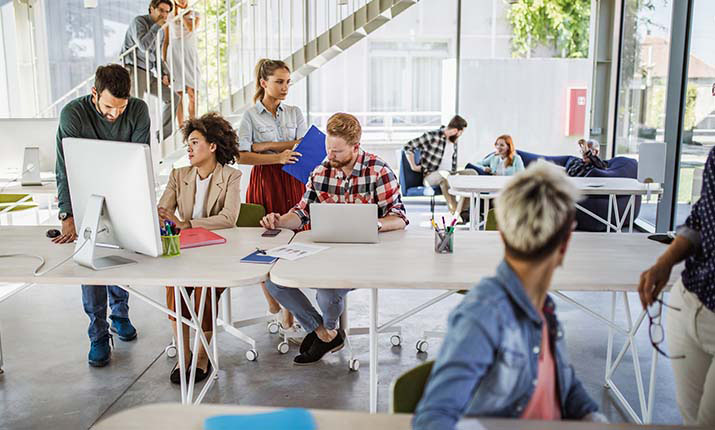 Business phone systems have come along way since their invention in the 1960s.

The first Private Branch Exchange (or PBX) was created by lawyers to ensure secure internal voice communications. The lawyers hired their own operators and purchased a small number of telephone lines – as well as blocks of switchboards – to create a private telephone network. Though perhaps clumsy in implementation – indeed, the very first PBXs required calls to be directed manually – the concept of a PBX was anything but.

In the 1970s automated switchboards took PBXs to the next level, making them more affordable and effective. The automated switchboards allowed for additional functionalities not offered by public providers. These included features that would later become essential, such as extension dialling, hunt groups and call forwarding.

During the 1980s, computing began to transform the world of business – and business phone systems were not immune. Time-Division Multiplexing (TDM) PBX systems were introduced. Such systems – which are in fact still the most commonly used by corporations today – look very much like a desktop computer and contain a CPU, RAM and an operating system. TDMs allowed businesses to use on-hold music, add additional lines more easily and required less space.

What next? Well, for many businesses, the evolution of their office phone system stopped there.

However, another computer-driven innovation – this time, the internet – allowed a new generation of PBX phone systems to be realised.

Unlike previous PBX developments (which improved upon, but did not radically transform, existing technologies), the next generation of PBXs would work in a completely different way.

IP PBXs, as they came to be known, marked a revolution, rather than an evolution, in business telephony

In many ways, these two networks are incredibly similar. Consisting of infrastructure such as copper cables, fibre optic lines, telephone poles and satellites, both networks allow us to communicate with people all over the world – instantly.

The traditional telephone network is a connection orientated circuit switched network. That sentence may sound a bit jargon-y, but the underlying principle is relatively simple. The telephone network facilitates communication by establishing a dedicated route between the source and the destination. Messages are transferred in their entirety via this route.

The internet, on the other hand, is a connectionless packet switched network. Again, this may sound confusing. Again, the underlying idea is fairly straightforward. In essence, information is broken into packets; and packets can be between senders and receivers without a direct route being set up.

At this moment, therefore, we have two competing global networks in place. And if this seems excessive – you’d be right.

In fact, major communications providers – including BT – have announced that they are moving away from the traditional telephone network, opting instead to use the internet. BT has stated that it will be turning off the UK PSTN in 2025 and will be moving entirely to IP telephony services.

So, what does all this have to do with PBXs?

Well, quite a lot. An IP PBX is a business phone system that allows communication to be sent either exclusively over the internet or through a mixture of the internet and the PSTN.

Since IP PBXs were invented in 1997, telephone engineers have been looking for ways to send voice communications via the internet rather than the traditional telephone network. Why? Because, even in 1997, the internet had the potential to connect calls for less money, increase available communications functionalities, bolster security and improve efficiency.

We say “potential” because, back then, telephone calls made of the internet (or VoIP calls) often cut out, could be jittery and were affected by delays and echoes.

What’s more, because the internet is increasingly becoming humanity’s preferred communication network, the quality of calls has improved to the point that it’s impossible to tell whether a call is being sent over the traditional telephone network or the internet. No more jitter!

There’s one more important development to PBX technology – cloud telephony. The original IP PBXs still required hardware to be located onsite, with businesses in charge of maintenance and management.

Cloud computing is the use of a remote network of servers hosted on the internet to store, manage and process data. In effect, when a user taps into the cloud, they tap into an incredibly powerful network of computers – which takes on much of the workload desktop computers previously had to undertake and increases connectivity between users.

A cloud telephony solution is an internet-based communications system which uses external hosting to manage storage, processing and switching. This means business owners are able to eliminate onsite hardware, reduce internal management and maintenance and benefit from a range of new features.

Horizon equips businesses with an extensive range of fixed and mobile telephony capabilities. These are controlled internally via an easy-to-use web portal – meaning that business owners always have complete control of their solution.

In effect, Horizon merges the formerly separate worlds of IT and communications – allowing businesses to benefit from one unified communications system. This makes is easy to:

When you choose Horizon, your solution will be hosted in our state-of-the-art, highly secure datacentre, and you’ll have direct access to our award-winning support team.

Elite Group is the UK’s leading unified communications provider. We can supply your business with a next generation business phone system.

Top 10 Reasons to Invest in UCaaS Solutions in 2022

What Is The Internet of Things and How Do You Stay Connected?