Encoded Light: What Is Optical Networking? 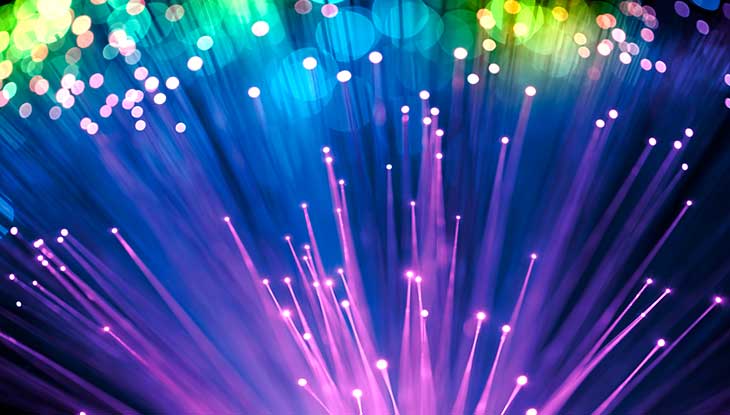 Optical networking is not that different to plumbing.

Fibre optic cable has a slightly larger diameter than a human hair. It is made of plastic or – more often – drawn glass. And it is flexible and transparent. These properties make fibre optic cable perfect for transporting light.

Imagine you’re stood in a dark corridor. You turn on a torch and shine it down the hallway. But there’s a corner. How do you get the light to curve around it? Simple: you place a mirror at the bend to reflect the light beam.

Lining the cable with a mirrored surface would be one way to do this. But this would be difficult and expensive. As such, engineers take advantage of a process call total internal reflection to achieve the same result.

Remember, light changes speed when it passes a boundary between two substances of different densities – such as air and glass. This change of speed causes light to change direction or refract, which is why your straw “bends” when you place it in a glass of water.

Total internal reflection is related to refraction, and occurs when:

When this happens, the light cannot pass through the boundary and is entirely reflected.

In this way, fibre optic cable can transport light over very long distances.

That explains how fibre optic cables transport light. But how does light carry information?

The most common type of fibre optic transmission involves sending light from LEDs or laser diodes through the cable and placing a photodetector at the receiving end. This looks for high or low light levels which are translated into a binary data stream.

In other words, electrical signals from digital circuits (high/low voltages) are converted into discrete optical signals (high/low light levels) using LEDs or solid-state lasers. These are then received by photodiodes or photo transistors on the other end and are translated back into electrical form before being introduced as inputs into a different digital circuit.

It is these signals which tell your telephone speaker to vibrate in a way that you recognise as a voice, that tell your laptop which colour each pixel should light up and in what order so that you can watch a film, and that tell your opponent’s computer what your last move was when you play an online game.

With more than three billion internet users – all sending and receiving data – optical networks need to carry a lot of information. But fibre optic cable is up to the task: a single cable can carry up to 20 billion light pulses a second! That’s a lot of signals.

Elite Group is the leading unified communications provider. We provide a comprehensive range of communications and IT services, including telephony, cloud and IT, connectivity and networking and business mobile.